GUELPH – Field reporters for The Modern Spirit have informed us of a developing situation in your lecture hall. Sources are saying that the guy that sat in your official unassigned seat isn’t treating it with nearly as much respect as you do. Our on-the-ground reporters have witnessed the unnamed student not only allowing his coffee to drip on the table, but also refraining from wiping it up, allowing a coffee ring to form.

Whoever that guy is, he clearly doesn’t know and appreciate the idiosyncrasies of your verified, official unassigned seat. Eyewitness reports have told us that he is now wiggling in place, causing that annoying squeaking sound that you so valiantly avoid at all costs. His friends, for whom he saved your friends’ unofficial assigned seats, are reportedly tapping him on his shoulder and whispering at him to “shut up”. They clearly don’t know that they should not be using such harsh language around a chair of that age.

This situation can only be described as disturbing. The unnamed student’s complete lack of respect for the seat is reaching a new low. Sources say he’s just scraped the gum off the bottom of it and thrown it in the trash, as if you weren’t saving that for the next particularly boring lecture. Has he no regard for his fellow students? 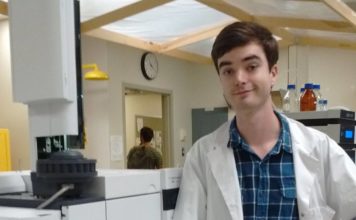