GUELPH – Field biologists working in Guelph’s Arboretum have discovered a new species today. The creature appears to be a form of supersized, evolutionarily advanced prokaryote. The mega-bacterium, whom we’ve named “Arbie”, has made the leap from a microscopic prokaryote to a full-fledged eukaryotic organism. This is a feat of evolution that seems straight out of Star Trek, mostly because the science is literally impossible and can be disproven by anybody who at least has their grade 9 biology.

Regardless, Arbie was spotted wandering the vicinity of a boardwalk, foraging for berries, bits of tree bark, and lost first-year students. We approached Arbie for an interview, to ask about how it managed to not only defy biology but also become self-aware. It had this to say: “I swear I will gain revenge on Oliver Thornbush, my cursed creator and the villain who bestowed this life of eternal suffering upon me.” Thornbush, who is a third year student studying Molecular Biology and Genetics, told The Modern Spirit that Arbie must have been “that project [he] did last semester that got, like, a 60%.” He admitted to tossing the then microscopic bacteria into the swamp, petri dish and all. He speculates that the organism must have begun by feeding on other microorganisms, eventually growing large enough to not only be considered a charismatic megafauna, but also develop a taste for human flesh and an innate ability to sense fear.

Needless to say, our interview with Arbie didn’t last very long, but through some speculation and journalistic prowess, The Modern Spirit has determined that Arbie is unhappy with its existence here at Guelph, and is living in a constant state of uncertainty, pain, and anger. To that, all we have to say is, “same”.

The Modern Spirit is determined to keep you updated on the status of our beloved new cryptid, and until such a time as it either leaves campus, enacts its revenge, or grows large enough to consume the Earth, we suggest using the buddy system while in the Arboretum. We also suggest that you be able to run faster than both your buddy and a hyper-evolved organism evolved to be the perfect hunter. 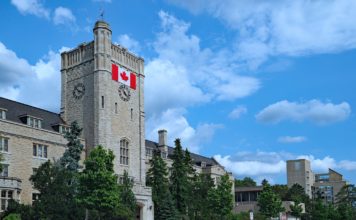