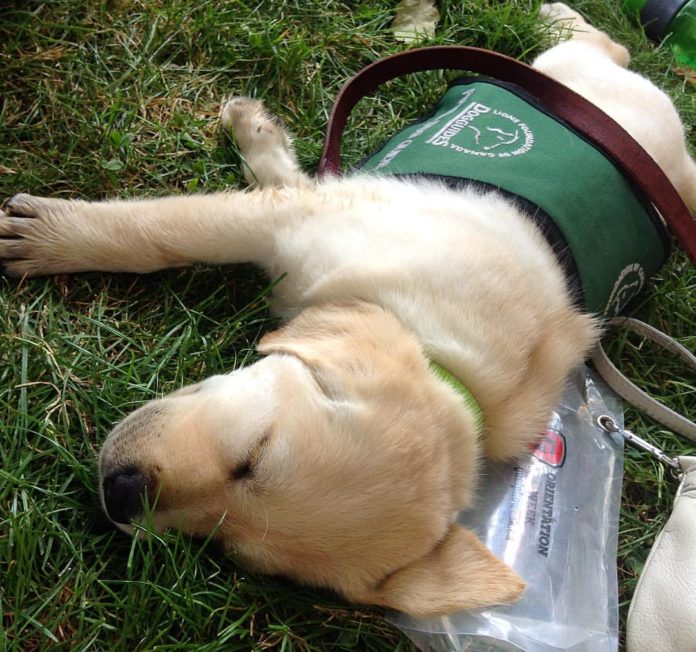 GUELPH – Students at the University of Guelph were thrilled at the sight of a gorgeous golden retriever making its way across Johnston Green today. The most precious floppy ears swinging wildly as this “good boy” bounded across the field caused many students to smile, some scream with joy, and three to immediately burst into tears at the sure innocence and beauty of the scene.

Such pleasure and joy was had that few stopped to notice the silhouette of a human following behind, nearly ruining the picturesque majesty of the tiny pup. The shadow person was holding a rope of some sort attached to the dog, but why? Why such a majestic and graceful canine bother towing this mass of carbon is beyond me.

While the dog eagerly ran to visit students and receive pats, the lollygagging louse on the leash slowed him down considerably, disallowing the proud puppy to achieve his true potential. It is this reporter’s opinion that the dog ditch the smelly human and go wherever he please.

“He really likes meeting new people,” said a voice from thin air, completely unprompted and ignored. Nothing else the invisible void said was taken on record as this reporter dropped his pencil to pet the amazingly soft dog for a solid three minutes.

We are pleased to report that he was in fact a good boy.

Is it Wednesday, or Sunday? Who cares?