Even after the municipal election, wherein he neutered his old council and weakened his mortal rival, John Tory’s, hold on City Council. We know from secret reports from Queen’s Park that the Premier still sits with a small shrine of the City as he envisions it in the corner of his office.

“It’s dangerous to go into Ford’s office sometimes because of the smoke.” Said one Ford staffer.

Apparently, Ford’s ultimate vision for Toronto is to have most of it on fire, and part of it under-water.

“His model looks like the city from Back to the Future 2 when Biff becomes mayor,” said Green MPP Mike Schreiner. “his dream is a dangerous one for our province and we need to hold the Premier’s office accountable.”

Although we know, for sure, that Ford won because of sheer luck, the deep-seated beliefs of the Boomer generation, and a province that was fed up with the incumbent party, it should be noted that, in the quiet periods, Premier Ford does pull out a dog eared book titled “sports almanac” and flip through it.

Reportedly, and maybe to give us some hope, those who have seen this almanac say that the pages are blank and the title has been drawn on in crayon. 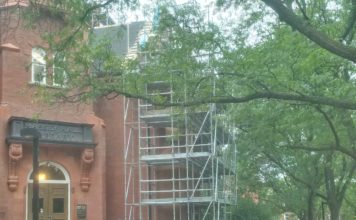 Homeless man abducted; no one cares