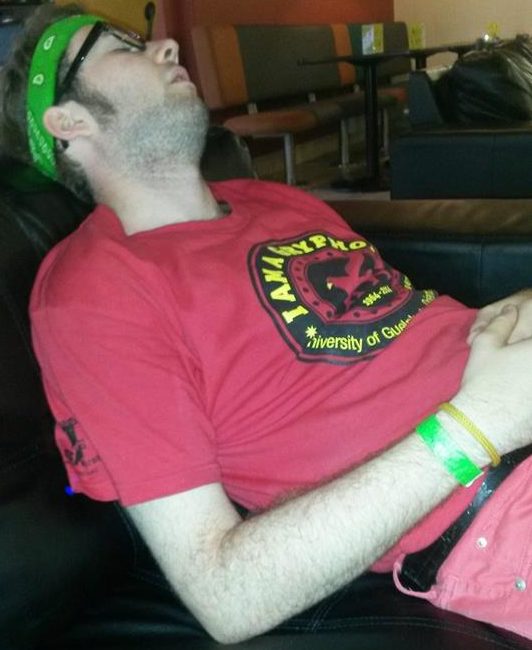 GUELPH – That point of the semester has arrived, according to everyone. Timothy Reed has decided to stay in bed this morning and miss out on that morning Analytic Analytics class. “I can do the readings at another time. I just get more stuff done from home,” he lied to himself.

Tim then walked us through his morning routine. Instead of going to class he spent another hour sleeping. It was kind of awkward, because he said he was going to show us his morning routine and then just went back to sleep. After listening to my own thoughts, he finally woke up, but did not leave the bed. Silently scrolling through various social media platforms, intermediately giggling at memes (pronounced MAY-MAYS) Tim completely ignored my existence for about another hour or so.

We were then invited to witness the daily ritualistic sacrifice of 7 toads. “It does wonders for my skin,” he said pouring the drained blood into a rudely carved stone bathtub. Several hours passed before he emerged from the blood. I would often ask myself how he managed to breathe down there, and also why was there so much blood from only 7 toads? It just doesn’t make sense. For a brief moment, I caught a glimpse of his true form: A slightly hairy, but still well-groomed Ray Liotta, star of the 1990s classic “Goodfellas.”

Timothy/Ray Liotta, star of the 1990s classic “Goodfellas” proceeded to fall short on their promise to themselves that they would get more work done from home. They watched the entire filmography of Ray Liotta all day. I obviously had to stay and watch the entire filmography of Ray Liotta for journalistic purposes. It’s not every day you can watch film classics like “Hannibal” and “Field of Dreams” in one sitting.

Homeless man abducted; no one cares