GUELPH – Taking inspiration from the United States, the University of Guelph has announced in a press release that they will be showing solidarity with the United States of America and leaving the Paris Climate Accord. “We felt bad that the U.S is the only country in the entire world that doesn’t care about the environment as much as we do”, said Ted Bownsley, chief coordinator of pollution.

Guelph Hospitality Services announced their excitement for the departure, as this would be excellent press to attract corporate interests and increasing plastic waste. “I love plastic, especially when it melts on the pavement of Winegard Walk”, says Bownsley.

President Trump has used the official method of communication of the United States, Twitter to express his gratitude to the University of Guelph. “Thank you bigly UofG for supporting the U.S against the fake news of global warming. Paris is scam. SAD.” 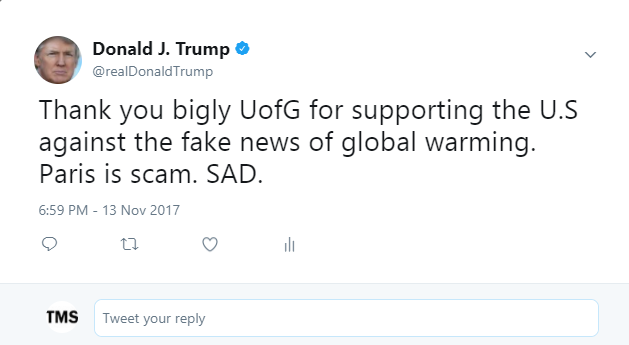 We are fairly sure the president thinks that the city of Paris is a scam. After reading this tweet, we took it upon ourselves to inspect the hospitality website for further information https://hospitality.uoguelph.ca/. The Modern Spirit has unveiled a hidden truth about their anti-climate agenda in their About Us section.

“Voted # 1 Food Service University – 10 Years In a Row. Hospitality Services is a self-supporting, break-even Department of the University of Guelph that manages numerous dining facilities and retail shops on campus”

Self-supporting?
What about supporting the environment and other people? So selfish.

Do you know who else manages numerous dining facilities and retail shops on campus?
The Hospitality Services at the University of Washington.

Do you know where the University of Washington is?
That’s right, Las Vegas. Do you know who goes to Las Vegas?
We don’t either because no one will tell us. 🙁

Emergency vehicles to use sign flags at night too